What is The Third Offset Strategy and What Role Does New, Cutting Edge Technology Play In It?

Already in defense parlance for a number of years, the Third Offset Strategy is the current iteration of the United States’ long-term and strategic plan to maintain defensive and offensive superiority—and hence, an effective deterrent—over likely adversaries. The Third Offset is a new iteration of previous strategies that have evolved since WW2. In order to best understand exactly what the Third Offset is, it is worth looking back to the post-WW2 era, when the First Offset Strategy was born as the world entered the nuclear age. Noting the historical arc of Offset Strategies can help clarify where the future of these strategies is heading, and can help formulate a better understanding of the extensive and continually-evolving role that technology plays within it.

The Birth of the First Offset in Post-WW2 Climate

The use of two nuclear weapons in the closing stages of WW2 announced to the world that the US was a nuclear power (in fact, the only nuclear power for a while) with the ability to deliver massive non-conventional strikes.

This strategy worked well enough until the Soviet Union’s nuclear program caught up with the US. Nuclear superiority was lost, and the situation stagnated (one could argue that the uneasy peace was maintained by the threat of mutually-assured destruction). There are now five members of the Nuclear Non-Proliferation Treaty (US, UK, France, Russia and China) and three more declared nuclear-armed powers (Pakistan, India, and North Korea). Israel falls into the category of undeclared nuclear power. When the Soviet Union revealed its program, the First Offset had become, effectively, a stalemate, with the two great world nuclear powers staring each other down.

As the US Hurtled into a New Political and Technological Era, the Second Offset Arose

The pace of technological advance being what it was—coupled with some notable industrial/defense industry espionage scandals—meant that other nations were bound to catch up, and so we find ourselves today at our current juncture of the Second and Third Offset, seeking a way to distinguish our capability through superior technology.

What is the Third Offset Strategy and How Has It Evolved?

So what is the Third Offset Strategy? Put simply, it is the teaming of human and machine to improve everything from decision-making and accuracy to efficiency and automation. This collaboration—increasingly involving machine learning and artificial intelligence—is not so much in answer to recent campaigns (where a counter-insurgency was being fought), but rather in response to present and future conflict with major powers. To quote Deputy Secretary of Defense Robert Work: “We have a resurgent Russia and a rising China. We need to focus on these high-end adversaries.”

[perfectpullquote align=”right” cite=”” link=”” color=”” class=”” size=””]So what is the Third Offset Strategy? Put simply, it is the teaming of human and machine to improve everything from decision-making and accuracy to efficiency and automation.[/perfectpullquote]

What is most remarkable about the Third Offset is who and how the Government is turning to in the pursuit of this strategy. There exist private sector opportunities like never before—small entrepreneurs and innovators whose disruptive thinking is developing new technology to place on the battlefield (the special mission units’ wearable technology suit is one example), or finding new applications for existing technology (weaponizing small drones, and developing a counter-drone program).

Many of the ideas and prototypes are possible through progress in miniaturization (cameras and sensors) or because of advanced computing power where machine learning, artificial intelligence, and autonomy all meet (algorithms to provide facial recognition, overhead image analysis, or pattern of life analysis). To again quote Secretary Work: “At its core, AI and autonomy will lead to a new era of human-machine collaboration.”

Implications and Reach of the Third Offset

So, what areas does the Third Offset seek to develop? Most commentators agree that there are broadly five components that make up the new drive for technological superiority:

The Third Offset requires—indeed it is dependent to a large degree on—a new model of Government and industry collaboration. For example, in the past, when a new fighter aircraft was unveiled and touted as having the latest technology, it was in fact already 10 years or more out of date as the cumbersome procurements process added years between product design, production and delivery. Those same disruptive thinkers that we’ve seen revolutionize so much of our everyday life are who the Government is turning to in order to develop and create capabilities that we would like to have, and capabilities that we don’t yet know are possible.[perfectpullquote align=”right” cite=”” link=”” color=”” class=”” size=””]The Third Offset—with its concentration on next generation technology—promises to bring the advantage home within a much shorter time span.[/perfectpullquote]

In order to shorten the timeline from concept to trial to adoption, several things have to happen: there needs to be a nimbler trials and prototype market, the encouragement of small businesses and startups to throw their hat into the ring, and a better understanding of the Federal Acquisition Regulations (FAR).

For a good example of how that is happening, one has to travel to Ybor City in Tampa, home of SOFWERX. SOFWERX is a non-profit connector, taking ground-breaking ideas and technology and linking inventors and entrepreneurs with end-users in the Special Operations community, particularly SOCOM. A visit to their offices (worth it in itself for a history-filled tour of the building and who frequented it in the Prohibition era) might reveal a bench of dissected electronics in one room as a multi-layer comms net is being tested, or advanced ballistic material in another for integration into a wearable operator suit. Indeed, Admiral McRaven’s vision of the TALOS (Tactical Advanced Light Operator Suit) started to take form in the “labs” at SOFWERX.

SOCOM is leading the way in pushing the Third Offset through its collaboration with SOFWERX, but also in its participation in SOFIC (Special Operations Forces Industry Conference). This four-day conference in Tampa in May each year takes the familiar conference/exhibitor format with booths, product displays, industry talks and breakout sessions, but a great deal of the emphasis is on innovation and bringing new technology to the attention of the SOF community. 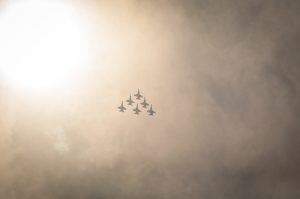 No offset strategy can promise immediate results, and it is true to say that the First and Second Offsets yielded an advantage only after many years of research and development, but the Third Offset—with its concentration on next generation technology—promises to bring the advantage home within a much shorter time span. Once that advantage is established, the real challenge will be maintaining it. Companies and Governments are becoming increasingly predatory in their ability to acquire new technology, not helped by intelligence leaks and the insider threat. The pace of technological change is unrelenting, and the question might soon be asked, “What and when will the Fourth Offset Strategy be?”

Clearspeed is deeply committed to the Third Offset strategy with its RRA technology. This is the very essence of human-machine teaming with aspects of AI, autonomy, machine learning, and of course an algorithm at the center administered by a human with a mission to screen out risk to your organization. For more information find us online at www.clearspeed.com or email us at info@www.clearspeed.com.

Weaving Ethics Into the Fabric of the Voice-Analytics Field
June 11, 2020